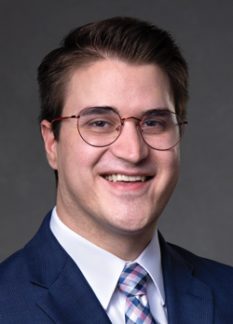 Philip graduated with Woolsack Society honors from Penn State University’s Dickinson School of Law. During law school, he served as a federal judicial intern to Chief Judge Christopher C. Conner and Judge Yvette Kane at the U.S. District Court for the Middle District of Pennsylvania. Before law school, Philip was an accomplished classical musician who routinely worked with Grammy Award- and Juno Award-winning musicians. He has performed in hundreds of concerts throughout the United States—including at Carnegie Hall—as well as in Canada and Italy.

Philip’s mission is to advise and advocate for his clients expertly, efficiently, ethically, and empathetically in all stages of a case, from pretrial to appeal.